According to USDA dietary guidance, we should be eating lots of whole grains, healthy fats, fruits, vegetables, and lowfat or nonfat dairy—no surprises there. Nutrition labels, however, may be leading you to think you’re doing a better job of meeting nutritional targets than you actually are. 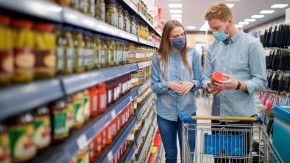 Misleading information on food labels makes it difficult to know if we are reaching our nutrition goals.

The majority of American shoppers—an impressive 90%—do read food labels, according to a poll by NPD market research group. In fact, the top two items examined are sugar content and calories. That’s a great start, but what about the information that manufacturers omit? The food industry’s vested interest in sales may obscure some of the most important information about its products.

Read on for some of what’s missing.

The health benefit of whole-grain food consumption is well-established, including lower risk of cardiovascular disease, weight gain, and diabetes. However, food labels are not required to disclose the percentage of whole grain content or the number of whole grains per serving, according to the American Academy of Nutrition and Dietetics. Recent research shows consumers are confused by product packaging: One-third to nearly one-half of participants couldn’t pick out the healthier option when presented with two grain products, according to the study published in Public Health Nutrition (PHN).

The industry-sponsored, unregulated 100% Whole Grain Stamp is a widely used marker purportedly designed to steer consumers toward healthy whole grains. However, products designated with this stamp tended to be higher in sugar and calories than many other whole-grain foods without the stamp, according to another PHN study.

The study categorized 545-grain products from grocery stores using a number of different methods for assessing the health value of whole-grain foods, such as having the Whole Grain Stamp, having a whole grain listed first in the ingredients, and having the word “whole” before any grain in the ingredients. What’s the best method?  “A criterion based on a ratio of total carbohydrate to fibre ≤10:1 may represent a useful method for consumers, policy-makers and organizations in identifying more healthful WG products,” the authors wrote. This calculation factors in the sugar content of foods because it’s part of the total carbohydrate shown on the label.

Of course, the best whole grains are the unprocessed variety such as barley, farro, brown or wild rice, quinoa, wheatberries, oats, or corn. Read Eat these foods to lower your risk of stroke, studies suggest on MDLinx.

Olive oil may be ‘adulterated’

According to the Dietary Guidelines for Americans 2020-2025, the standard American diet contains too much saturated fat and not enough unsaturated fats—ie, fats that are liquid at room temperature. The latter play an important role in the diet because they can improve serum cholesterol levels, ease inflammation, stabilize heart rhythms, and provide other benefits, according to the Harvard T.H. Chan School of Public Health. The most widely touted healthy fat is olive oil, a monounsaturated fat with a high polyphenol content that offers an array of health benefits.

An article published in The Journal of the American College of Cardiology by Harvard researchers found that people whose diets included at least a daily half-tablespoon of olive oil had a 14% lower risk for cardiovascular disease, and an 18% lower risk for coronary heart disease, than people who consumed no olive oil.

Extra virgin olive oil (EVOO) is the least processed of all the olive oils, and because of its high phenolic antioxidant content is considered most beneficial. However, EVOO has a long history around the world of economic adulteration—the spiking of olive oil with unlabeled cheaper oils—ie, soybean, corn, or other oils that don’t have the same health benefits, according to the authors of an FDA study published in the Journal of American Oil Chemists’ Society. Based on the samples tested in the FDA study, however, adulteration of EVOO does not seem to be a large concern in the United States. In the 88 EVOO products that were tested, the study found an overall “low occurrence rate of adulteration (<5 %), based on purity criteria for desmethylsterols and triterpene dialcohols.”

The FDA’s findings mirror the results of the North American Olive Oil Association’s (NAOOA) robust monitoring efforts, which sampled an average of close to 200 olive oils annually directly from retail shelves for 20 years, according to Joseph R. Profaci, executive director of NAOOA. “The olive oils were tested in independent labs certified by the International Olive Council (IOC). The IOC was chartered by the United Nations more than 50 years ago to oversee the production and quality of olive oil around the world. The cumulative results of the NAOOA’s testing support the finding that 98 percent of olive oil sold in US retail outlets is authentic.”

Manufacturers that participate in the olive oil quality seal program agree to have their products randomly purchased from grocery store shelves, and tested by independent laboratories. Other industry advice for improving your odds of obtaining pure EVOO: Buy from a trusted retailer and well-known brand, and be wary of prices that seem “too good to be true.”

High quality raw honey—that’s right, the sweet syrup that bees produce—is loaded with flavonoids and phenolic acids that play a key role in human health. Honey has free-radical fighting antioxidant properties, as well as immune-boosting and anticancer benefits. What’s more, honey is a potent prebiotic, meaning it nourishes the good bacteria that live in the intestines, which are crucial for digestion and overall health. Honey is also a natural antifungal and antibiotic that helps wounds heal when used topically post-surgery, studies have shown. Darker honey tends to be even higher in these beneficial compounds than lighter types. For more about honey’s disease-fighting properties, see Natural remedy fights colds, cancer, asthma, and more, study shows on MDLinx.

However, many of the health benefits of honey are lost when it is heat-treated, processed, and filtered. Even worse, one study found that one-third of honey sold internationally is either adulterated with non-beneficial cheaper sweeteners such as high fructose corn syrup or is not honey at all, according to the Honey Adulteration Project. In fact, honey is one of the top three most faked foods, according to the Food Fraud Database maintained by food compliance company Descentis. To be sure of obtaining the health benefits, buy honey labeled as “raw,” unpasteurized, and harvested in the United States. Farmer’s markets can be a reputable source.

According to several studies, blueberries are highest in free-radical fighting antioxidants, compared to other common fruits and vegetables. During the body’s natural oxidation process, some cells become damaged and form free radicals. They can set off a chain reaction that harms more cells and possibly ignites disease. Antioxidants can neutralize free radicals, which are linked to cancer, heart disease, Alzheimer disease, and Parkinson disease.

Many breakfast items sold in supermarkets seemingly contain blueberries, such as blueberry oatmeal cups, bars, bagels, baking mixes, frozen waffles, and the ever-popular muffins. Despite packages that claim they contain “real fruit,” the ingredient list on many of these treats reveals that the "blueberries" are nothing more than sugar, corn syrup and blue dye clumped into berry-sized bits along with some soybean oil and flavoring agents. Processed foods that do contain actual blueberries may contain more flavoring agents than the real thing. To reap the health benefits of blueberries, stick to the kind sold in the produce aisle.

According to the federal dietary guidelines, calcium and vitamin D—along with potassium and dietary fiber—are considered nutrients of public health concern because of underconsumption in the population. About 90% of the US population does not meet dairy recommendations: 3 cups of vitamin D-fortified milk a day or its equivalent for adults.

Dairy foods are one of the best dietary sources of naturally occurring calcium, but not all dairy is created equal: 1 cup of nonfat or lowfat milk contains a whopping 300 mg of calcium and just 0 g to 1.5 g of saturated fat. When it comes to cheese, so-called “hard cheese” such as cheddar or jack contains two-third of milk’s calcium content (200 mg) but 11 g of saturated fat. One half-cup serving of cottage cheese has even less: just 60 mg of calcium. Cream, sour cream, and cream cheese are not recommended due to their low calcium and high saturated fat content.