Many medical forms begin with two checkboxes, one of which the patient is required to tick: male or female. But millions of Americans don’t fit into this binary. Furthermore, this represents just a sliver of the bias, discrimination, and barriers to medical care that transgender people face. 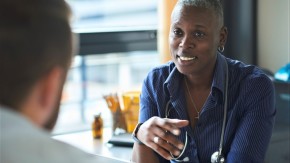 There are many simple steps physicians can take to make their practice transgender-inclusive.

Along with other LGBTQ+ patients, trans people often navigate a medical system that is not equipped to provide adequate treatment. The setback begins in medical school, where transgender medicine is not often part of the curriculum, and continues into clinics and institutions, where physicians may be unprepared, uneducated, or consciously or unconsciously biased.

Change is coming, albeit slowly. In May, the Biden administration said it would reverse a Trump administration policy that removed gender identity from a section of the Affordable Care Act that prohibits discrimination based on race, color, national origin, sex, age, or disability. By reversing that decision, the more than 1.7 million people in the United States who identify with a different gender from the one assigned to them at birth are now legally protected from discrimination by medical institutions that receive federal funding.

However, roughly 1 in 6 trans individuals experience discrimination and/or harassment when seeking healthcare, according to a poll conducted by the Harvard Chan School, NPR, and the Robert Wood Johnson Foundation. That same poll found that roughly 1 in 5 trans people avoid seeking medical care due to fear of discrimination.

There are simple ways physicians can be inclusive of all patients, regardless of gender. To help you create the safest and most welcoming environment, here’s a breakdown of the barriers to care that trans people experience, along with several tips on how to make your practice trans-inclusive.

In December 2016, the National Center for Transgender Equality published the findings of the Report of the 2015 US Transgender Survey, which illustrated many of the hurdles that trans people face in healthcare, as well as some of the issues that make trans people a particularly vulnerable population.

The survey found, for example, that respondents experienced high levels of mistreatment, with 33% saying they’d had at least one negative experience with a health provider relating to being trans. These negative experiences ranged from verbal abuse to being refused treatment as a result of their gender.

The survey also found that trans people also experience certain health issues at disproportionate rates. For example, 1.4% of respondents were living with HIV, which is 5 times the overall rate of the US population (0.3%). According to a study published in BMC Medical Education in 2019, LGBTQ+ populations tend to experience higher rates of asthma, cardiovascular disease, obesity, substance abuse, smoking, and some cancers.

However, as a result of discrimination or fear of discrimination, trans people often avoid seeking care. The survey found that, over the previous year, 23% of respondents had skipped going to a clinic when they needed to, out of fear of mistreatment.

As pointed out in an article published by the American Heart Association in June 2019, consequences include the creeping development of chronic diseases, or cancer that a screening could have detected. The toll of all of this is summed up in two statistics included in the 2015 US Transgender Survey: 39% of respondents experienced serious psychological distress in the month prior to completing the survey, and 40% of respondents had attempted suicide in their lifetime, which is nearly 9 times the overall rate in the United States (4.6%).

While these seem like complicated issues to tackle, you can make a big difference by taking simple steps in your own practice. The very first thing you should always do is ask the patient about their preferred pronouns—and use them!

The authors of the BMC Medical Education study described some other steps. Researchers analyzed the findings of 60 articles to explore strategies for assessing and mitigating implicit bias toward LGBTQ+ patients. They concluded that the first step toward reducing implicit bias is to educate staff and encourage them to reflect on hypothetical situations in which they’re treating trans patients. This includes addressing and trying to reduce defensiveness in clinicians. The study’s authors also suggested certain practices that could help reduce implicit bias, including “mindfulness meditation to promote nonjudgmental awareness; individuation training to encourage providers to focus on individual attributes rather than group membership; and training in emotion regulation skills to reduce stress levels and negative emotions.”

This training enables colleagues to feel more comfortable disclosing their own sexual orientation and/or gender identity. This, in turn, may change institutional attitudes, creating an environment that is more accommodating to trans people and the LGBTQ+ community at large.

A report published by the Planned Parenthood of the Southern Finger Lakes Sexuality Education & Training Center outlines many of the barriers that trans people are likely to face in a health clinic, and how to ameliorate them.

These include medical forms that are gendered in a way that doesn’t apply to a trans person. The authors suggest making all forms gender-neutral and including space for preferred pronouns, which allow a patient of any gender identity to fill out their details with ease. The authors also suggest that clinicians give the patient the option of being referred to by their preferred name, as opposed to their legal name.

Other tips include: Adopting unisex bathrooms, instead of gendered bathrooms; being sensitive about using medical/anatomical language that is in conflict with a patient’s gender identity; and training all staff members about basic transgender issues and culturally appropriate language.

One vital aspect to all of this is understanding common medical issues affecting those who are undertaking hormone therapy or going through physical transition. For example, many providers are unaware of how hormones will interact with other medications, which can be dangerous for the patient. The report’s authors also suggest making educational materials (including pictures and anatomical models) available to clinicians, so they’re well-versed in the sexual and reproductive health concerns of trans patients.

The most important lesson is to stay flexible and educate yourself so you can provide the best care for trans patients, and become their advocate. If you can learn to stop making assumptions about a patient’s gender, accept gender fluidity and non-traditional gender presentation, and treat all patients with compassion and understanding, you’ll be on your way to building a trans-inclusive clinic.