Exercise and self-care both require time—a physician's scarcest resource. With packed schedules and the pressures of modern medical practice, how can doctors fit a little “me time” into their daily routines? 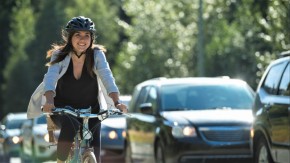 Cycling to work is a great way for physicians to improve both physical and mental well-being.

Enter cycling. Not only is riding a bicycle a fantastic form of exercise that can improve physical and mental health, it can also be a convenient way to get to work. So, could replacing your commute with a practical workout help make you a better doctor?

Compared with high-level professionals in other industries, doctors report working more hours and feeling less satisfied with their work-life balance. The demands of the job lead to high burnout rates, which in turn can lead to poor performance. Physician burnout can drastically increase the risk of medical errors and other adverse patient safety incidents that degrade the quality of care.

Consistent exercise can improve physical and mental health. In addition to obvious outcomes like better cardiovascular health and lower obesity rates, those who exercise frequently report better sleep, stronger interpersonal skills, and increased productivity compared with those who do not.

Unfortunately, the extreme hours many doctors work often leave little time for exercise and self-care. Many physicians work more than 50 hours per week, with some logging between 60-80. Those lengthy workdays grow even longer when they’re bounded by a sedentary commute.

Some may enjoy the solace of a car, a radio show, and gridlock—but studies indicate that automotive commutes are bad for our health. A recent roundup from Keck Medicine at the University of Southern California pointed to a number of negative outcomes from time spent in traffic.

More stress is the opposite of what doctors need as they begin and end each day. A survey conducted by Christopher Sampson, MD, of the University of Missouri School of Medicine, found that 75% of medical residents who commuted an hour or more each direction considered that journey to the hospital to be detrimental to their well-being.

Studies show that those who commute via bicycle, on the other hand, report very positive mental health outcomes. A study conducted in Portland, OR, and published in the Journal of Transport & Health found that those who bike or walk to work were happier with their commutes than those who drove or used public transportation—and less likely to be affected by stressful traffic congestion.

Another study by American, British, and Spanish researchers dove even deeper. It found that bicycle commuters had a significantly lower risk of self-reported stress than non-bicycle commuters, with those who cycled to work four or more days per week experiencing the most dramatic effect.

Cycling is a highly rewarding mode of aerobic exercise and a practical form of transportation. By cycling to work rather than driving, doctors can take advantage of these health benefits without carving more time for exercise out of their already jammed schedules.

Many doctors already reap the benefits

In recent years, doctors have spoken out about how cycling—either as a leisure-time exercise or as transportation to work—has improved their lives and livelihoods.

“A job like mine requires a remarkable amount of stamina and presence. You have to absorb so much stress and emotion while still planning and preparing,” Montefiore Medical Center’s John Loehner, MD, wrote recently in the magazine Bicycling. “The experience I’ve had over the decades cycling—those cognitive exercises and the demands of racing—are directly applicable to my professional life now.”

Loehner rides to stay fit and unwind from the stresses of emergency care. Other doctors who cycle to work have argued that it makes them friendlier, and can even save them time. Writing for Medscape, Gregory A. Hood, MD, of Baptist Health in Lexington, KY, noted that one colleague who cycled to work could start his days earlier because the bicycle cut out the hassle of searching for a space in the hospital parking garage.

Despite these benefits, cycling to work remains fairly uncommon in the United States. According to the US Census, it’s estimated that fewer than 1% of American adults ride bicycles to their jobs—though those numbers are higher among younger workers.

Doctors are known to lead the way, however. According to Sampson’s report, 11% of surveyed medical residents reported cycling to work—well above the national average. The majority of those surveyed were commuting to major academic medical centers in urban hubs, though not all doctors will have the same opportunities to bike to their jobs.

But protected bike lanes and other cycling infrastructure are becoming common in cities, creating safer environments for doctors to commute without having to get behind the wheel. If you’re a practicing doctor in a place where it’s conducive to cycle to work, it may be worth the effort to try a new, healthier commuting routine—it could be beneficial for yourself, your patients, and the environment.