America spends over $3.6 trillion a year on healthcare—and more per capita than any other country in the world. But, despite this, many of our neighbors have a longer life expectancy and better clinical outcomes. What gives? 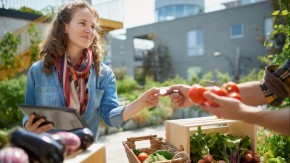 Eating whole foods is one way to lower your risk of cardiovascular disease, cancer, and other serious health conditions, according to research.

It’s complicated, but some attribute this to America’s obesity crisis. According to CDC data, more than two-thirds of Americans are considered overweight or obese, and the rise of obesity has occurred in parallel with increases in the rates of diabetes, heart disease, and cancer.

According to a study published in Nutrients, poor quality of diet is the leading “actual” cause of death in the United States, “accounting for 529,299 deaths in 2016, with the majority of these deaths (83.9%) due to cardiovascular disease” and other adverse health outcomes related to bad eating habits.

But solving this problem has proved tricky. Fad diets abound, and they bring complex rules and regimens that make them nearly impossible to stick to. On top of this, many of these diets lack a solid body of evidence that shows they work, and some may even be detrimental to your health.

According to various studies and health experts, following one golden rule will lower your risk of various chronic diseases, provide you with a balanced nutritional intake, and may even help promote weight loss. And what's that rule? Stick to whole foods, rather than processed foods.

Let’s have a closer look at whole foods and why placing them at the center of your diet can benefit your health.

What are whole foods?

The aforementioned Nutrients study focused on the impacts of switching to an “ad-libitum whole-food plant-based” diet, and its authors broke down what’s allowed and not allowed as part of this eating pattern.

Those adhering to the diet can eat large amounts of the following:

The diet also allows the following foods, but in limited quantities:

The diet prohibits the following foods:

In the Nutrients study, participants were also prohibited from eating all animal products, including poultry, seafood, eggs, and dairy. However, many proponents of the whole-foods diet aren’t quite so strict.

For example, in an article published in The Permanente Journal, Benjamin Ha, MD, wrote about his experiences prescribing a whole-foods diet to his patients. While many advocates are vegan and consume no animal products, a variation on the diet that was popular among his patients was to be “flexitarian” and occasionally allow themselves to eat small amounts of dairy and animal protein.

According to Ha, after switching to a whole-food and predominantly plant-based diet, some of his patients were able to stop taking diabetes medications that they’d been using for years. Others lost weight or experienced a lowering of their blood pressure, and some “dramatically reduced" their need for prescription medications. Of course, these are all anecdotal cases––so let’s explore the evidence in the literature.

The adverse health impacts that result from consuming processed foods have been well-documented. In a study published in the BMJ, researchers examined the relationship between consumption of ultra-processed foods and risk of cardiovascular diseases, using data on a cohort of 105,159 participants at least 18 years of age. They monitored subjects’ food intake and tracked overall risk of cardiovascular, coronary heart, and cerebrovascular diseases.

After analyzing subjects' health over a follow-up of an average of 5.2 years, researchers found that intake of ultra-processed food was associated with a higher risk of overall cardiovascular disease, coronary heart disease risk, and cerebrovascular disease risk. The association was “statistically significant” and remained so even after findings were adjusted for other nutritional factors (like intake of saturated fatty acids, sodium, sugar, and fiber).

Another study, also published in the BMJ, looked at any association between the consumption of ultra-processed foods and all-cause mortality. Using a cohort of just under 20,000 participants aged 21-91, researchers examined subjects’ eating habits over a study period of 15 years and monitored all-cause mortality among the group.

On the other side of the equation, a review published in Nature analyzed the efficacy of using a whole-foods, plant-based diet as an intervention for subjects with high BMI or dyslipidemia. Researchers explored the impact of a 6-month intervention on 65 subjects aged 35-70, all of whom were diagnosed with obesity and either type 2 diabetes, ischemic heart disease, hypertension, or hypercholesterolemia.

After 6 months, researchers found that the diet intervention resulted in a greater reduction in BMI, cholesterol, and other risk factors. They concluded that the intervention was more effective than “any other trial that does not limit energy intake or mandate regular exercise” and pointed out that a key advantage of the diet is “eating to satiation without restricting the amount of food eaten.” Click here to read more about whole foods that will keep you feeling fuller longer, on MDLinx.

The findings published in Nature are corroborated by the aforementioned study published in Nutrients, in which researchers analyzed the health of 79 participants who spent 8 weeks consuming a whole-foods, plant-based diet. Those who completed the 8-week intervention experienced an average weight loss of 5.5 kg and also experienced a reduction in blood pressure, plasma lipids, and cholesterol. Beyond this, 21 of the participants were able to decrease at least one medication for a chronic disease. Even those who were already vegan or vegetarian at the beginning of the study experienced “statistically significant weight loss and reductions in total and LDL cholesterol,” according to researchers.