Ever wonder why, in 2021, physicians are still prescribing contraceptives that were developed decades ago? Or why so many contraceptives on the market still have high failure rates, interfere with hormone levels, or are needlessly uncomfortable? Or, for that matter, why most contraceptives are still designed for women? 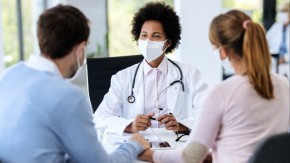 Researchers are zoning in on novel methods of contraception.

Good news: Reproductive research is advancing and novel contraceptives are in the works. From a gel that temporarily lowers sperm counts to engineered antibodies that immobilize them, here are the latest developments in contraception research that could change sex forever.

Antibodies have been in the news a lot recently, as COVID-19 continues to dominate the headlines. But a team of researchers at the University of North Carolina at Chapel Hill are looking into another use for them: stopping sperm in its tracks.

Authors of the research, published in Science Translational Medicine in April, focused on using the precision targeting of monoclonal antibodies to affect sperm. Researchers already knew that some women naturally develop antibodies that block their partner’s sperm, so they engineered highly multivalent IgG antibodies, which turned out to be 10-16 times more potent than the best-known antibody at agglutinating sperm and reducing permeation through cervical mucus. Specifically, at a dose of 333 mcg, the antibodies stopped all human sperm motility, and at a lower dose of 33.3 mcg, the antibodies trapped 97%-99% of sperm.

Producing monoclonal antibody drugs can be cost-prohibitive, so researchers are exploring the possibility of increasing the potency of the antibodies to see whether lower doses could have the same efficacy. They’re developing an intravaginal ring that would slowly release the antibodies, as well as a dissolvable film that could be placed inside the vagina before sex.

The researchers note that many women avoid this type of hormonal contraception because of its side effects, such as irregular bleeding, nausea, depression, weight gain, migraines, and others. These effects will be explored in human clinical trials, beginning in 2023.

There’s a gender imbalance in available contraceptives—most are for women, to prevent pregnancy. But if the findings of a study published in Andrology are any indication, that may change.

Researchers explored the effectiveness of a gel called NES/T, which is made of segesterone acetate, a progestin hormone (which is used in female contraception), and testosterone. The gel, a reversible contraceptive for men, is applied to the upper arms and shoulders and absorbed through the skin, and it works by suppressing sperm concentrations.

Study authors examined a cohort of 44 healthy men to compare the effects of the combined NES/T gel with those of a gel simply featuring testosterone over a 28-day study period. They found that, after 21-28 days, roughly 84% of the NES/T group had suppressed serum gonadotropin concentrations to the point of effective contraception, compared with just 16.7% of the T group. Researchers concluded that the combination gel worked “effectively and safely” and is “acceptable to most men.”

As of March, several more human clinical trials either have taken place or are underway, with results expected in 2022.

If you’re not into gels, a birth control pill for men is also in development. And, according to a study published in The Journal of Clinical Endocrinology & Metabolism, it appears to work.

This daily pill contains dimethandrolone undecanoate (DMAU), which has androgenic and progestational activity. Much like the gel mentioned above, the pill suppresses certain hormones, including testosterone, luteinizing hormone, and follicle-stimulating hormone.

Researchers tested the pill in a cohort of 100 healthy men aged 18-50, who received 0 mg, 100 mg, 200 mg, or 400 mg of DMAU daily over a 28-day study period. Of the 82 men who completed the study, none had any adverse reactions. Those in the groups taking 200 mg or more exhibited a marked suppression of sex hormones, indicating that DMAU could be effective as a male contraceptive.

DMAU isn’t the only potential oral contraceptive for men. A study, published in the Journal of Medicinal Chemistry, showed that ouabain, an African plant extract, may represent a safe, effective, and reversible analog.

Ouabain interferes with the passage of sodium and calcium ions through the membrane of an enzyme found in sperm cells. Researchers tested the substance on rodents and found that it curbed their fertility by reducing sperm motility. They also concluded that the substance had no toxicity in the rodents and that, if treatment with ouabain was stopped, subsequently produced sperm cells would be unaffected. Ouabain has not yet been tested in humans.

Other contraceptives on the horizon

In February, a study published in Nature Communications pointed to triptonide as a potentially safe, effective, and reversible male contraceptive. The study used animal models to test the compound, which is produced from a Chinese herb called Tripterygium wilfordii Hook F, and found that single daily oral doses result in close to 100% of sperm having little or no forward motility, after 3 to 6 weeks.

Another study, published in Nano Letters in July, took a different approach to contraception: targeting testicles with magnetic, biodegradable nanomaterials. Researchers explored heating up nanomaterials which are guided into the testes to decrease sperm count with the elevated temperatures. They found that after injecting nanoparticles into the bloodstream of mice and guiding them to the testes with magnets, they could use an alternating magnetic field to create a temperature of 104 F. This inhibited spermatogenesis before a gradual recovery 30 to 60 days after treatment. The mice were infertile for up to 7 days after treatment.

While some of these options are a long way from arriving on the shelves of your local pharmacy, they’re certainly cause for optimism for those who’ve been waiting for greater efficacy and gender equality in contraception.

For related reading, check out the following articles on MDLinx: