If you’re looking to get fit but feel like you don’t have the time, some new research findings may be just the news you've been waiting for. 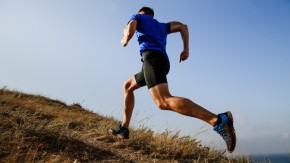 Studies have shown that high-intensity interval training can produce good fitness results but now researchers are honing on just how long those intervals should be.

It’s all about high-intensity interval training (HIIT), a type of training that involves repeated short bursts of intense, strenuous exercise, with breaks for resting in between. Plenty of past research has shown that HIIT can produce results as good, if not better, than continuous physical activity, like taking long jogs or swims. But, if you’re planning on switching to HIIT, how long should these short bursts be?

While researchers tend to agree that each interval should stimulate and pressure our muscles, lungs, and heart, the perfect interval length has remained open to debate––until recently, that is. Now, a team of researchers at the University of Texas at Austin believe they’ve found the right answer: just 4 seconds.

The research team reached this conclusion after testing how long it took cycling athletes to reach their maximum aerobic power output on stationary bikes. Cyclists achieved maximum effort after roughly 2 seconds, and while they found it difficult to maintain that effort over a long period, they could easily hit the same power output repeatedly.

With this knowledge, the researchers decided to create a HIIT regimen based on intervals that were as short as possible. Given that participants would be regular exercisers rather than professional athletes, they opted to double the amount of time it would take to reach maximum effort, to 4 seconds. Here’s what they found after conducting three studies on HIIT training with 4-second intervals.

The first study, published in Medicine & Science in Sports & Exercise in October 2020, involved a cohort of eight college students—four men and four women—who were tasked with completing five 4-second cycling sprints per hour over an 8-hour period.

Researchers measured fat oxidation, plasma glucose, insulin, and triglyceride concentrations and found that the 4-second interval training resulted in a 31% decrease in postprandial plasma triglyceride response and a 43% increase in whole-body fat oxidation the following day, compared with those who spent 8 hours sitting and inactive. They concluded that this collective 160 seconds of sprints led to volunteers metabolizing fat far more efficiently the following day.

A follow-up study, published in the same journal in June of this year, produced similar results. This time around, researchers focused on the impact of 4-second HIIT on skeletal muscle mass and cardiovascular function in untrained participants between the ages of 50-86.

They found that participants increased their muscle volume and that physical performance measures, like peak oxygen consumption, all increased significantly. They even noted that participants’ arterial stiffness (an indicator of increased risk of cardiovascular disease) decreased over the study period.

The most recent study

The team’s most recent study, published in Medicine & Science in Sports & Exercise in July of this year, went back to using young healthy people as its subjects. This time around, researchers sought to examine the effects of 4-second HIIT on the maximal anaerobic power, peak oxygen consumption (VO2peak), and total blood volume of 11 individuals all in their early 20s.

Participants spent 8 weeks completing 3 sets of training a week, each of which involved 30 bouts of 4-second cycling sprints. This time around, researchers gradually decreased the recovery time between sprints, from 30 seconds to 24, and eventually to 15 seconds.

Researchers found that by the end of the study period, participants had improved their VO2peak by an average of 13%, exhibited a 7.6% increase in total blood volume, and increased their maximal anaerobic power by 17.2%. They concluded that the findings demonstrate that both maximal aerobic and anaerobic power can be increased with a minimal time commitment—over the 8 weeks, participants engaged in just 48 minutes of exercise.

A time-efficient way to boost health

If you’re looking to improve your strength, fitness, and cardiovascular health without having to drop any of your current hobbies or compromise on time, HIIT training may be the way to go. And the studies above indicate that putting in your maximum effort for very short periods of time can produce good results.