It's probably no surprise that the ancient practice of yoga is among the most popular complementary health approaches in the United States—indeed, it is practiced by more than 13 million adults in this country, according to a review published in Brain Plasticity. 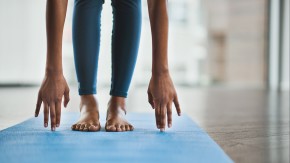 Yoga is becoming more accepted by mainstream medicine as a growing body of research demonstrates its numerous benefits to physical and mental health.

Yet, many still people, including healthcare professionals, hold the perception that yoga is not as beneficial as conventional exercise—that it only improves flexibility, for example, or doesn’t provide aerobic benefits. And yoga has yet to take hold as a mainstream medical treatment.

However, current research suggests we should be looking at yoga through a different lens. In addition to the more well-known health improvements like balance, mobility, and strength, studies show yoga can help regulate blood glucose levels, improve circulation, enhance cognition, lower the risk of high blood pressure and cardiovascular disease, reduce pain, and much more.

And it’s not just the body—research shows that yoga is good for the mind as well, improving mental and psychological health. In the early days of the pandemic, Harvard Health even recommended yoga as a way to cope with COVID-19-related anxiety.

These days, it appears that more mainstream physicians are prescribing yoga therapy as well. As a growing body of research demonstrates yoga’s health benefits, yoga is now being recognized as a clinically viable treatment, with established programs at major health care centers, such as The University of Texas MD Anderson Cancer Center, New York's Memorial Sloan Kettering Cancer Center, the Cleveland Clinic, and others, according to an article published in Yoga Journal.

With that in mind, let’s look at the health benefits of yoga—from improved cardiovascular health to reduced depression, according to recent research.

How does yoga improve physical function? In a review published in the International Journal of Behavioral Nutrition and Physical Activity (IJBNPA), researchers examined findings from 27 studies to find out. They concluded that practicing yoga had significant effects on individuals when compared with control groups in a range of areas, including balance, lower body flexibility, and lower limb strength. What’s more, cardio-respiratory fitness, upper body flexibility, and walking speed were also improved in participants who practiced, vs those who didn’t.

A number of the other physical boons of yoga were explored in a review published in the journal Children. The sympathetic nervous system is activated when we perceive a threat or feel stressed. Known as the “fight or flight” response, this results in reduced blood flow to the extremities and the digestive system, increased heart rate and blood pressure, and a rise in blood sugar levels. Yoga counteracts this response by stimulating the parasympathetic nervous system, producing effects like increased blood flow to the digestive system, brain, extremities, and sexual organs, and lowered heart rate and blood pressure.

The authors of the review also cite multiple studies that indicate yoga can lower markers of inflammation in patients with chronic diseases. Chronic inflammation, which is the body’s immune response to infection or injury, can increase the likelihood of developing chronic diseases like diabetes, cardiovascular disease, autoimmune disease, and others. Research has shown that the practice of yoga is associated with decreased inflammatory markers, including inflammatory cytokines in the blood, as well as increased levels of multiple immunoglobulins and natural killer cells.

The authors concluded that regular yoga can lower risk of cardiovascular disease, lower blood pressure, improve circulation, ease symptoms of arthritis, and even help to treat chronic low back pain.

Along the same line, authors of the Children review noted that yoga can increase certain neurotransmitters and hormones, including GABA, serotonin, and dopamine—all of which are natural antidepressants. GABA helps reduce neuronal excitability, and can quell stress, fear, depression, and anxiety. It also helps regulate sleep by increasing levels of melatonin, and increases levels of oxytocin (known as “the bonding hormone”) which leads to greater feelings of well-being.

Likewise, a review published in Complementary Therapies in Medicine in May of 2021 pooled results from 25 studies and medical articles relating to yoga’s impact on mental health, and found that the practice can boost well-being by decreasing stress, anxiety, and depression, regardless of whether participants were healthy or chronically ill.

Yoga also appears to have a positive effect on cognition, as noted in the Brain Plasticity review. Authors examined findings from 11 studies, which measured the impact of yoga on brain structure, brain function, cerebral blood flow, and more. They concluded that studies have produced evidence that yoga may help mitigate age-related and neurodegenerative cognitive decline.

Some of the studies established associations between yoga and anatomical changes in various regions of the brain, including the frontal cortex, hippocampus, anterior cingulate cortex, and insula. Other studies showed that yoga led to increased grey matter volume, grey matter density, and cortical thickness. While these changes suggest that yoga may offer neuroprotective effects, yoga’s impact on brain function warrants further study.

Nonetheless, the researchers were encouraged. “While the nature of yoga’s relationship with brain function seems less straightforward than it does with structure, the evidence still points toward yoga exerting a beneficial effect on brain function,” the authors wrote. “Findings that link the pattern of brain functioning observed in yoga practitioners to performance or health outcomes offer support for the beneficial influence of yoga on brain function.”