Is artificial intelligence (AI) going to change medicine forever? Some would say yes—and that change has already begun. 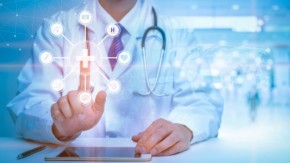 Artificial intelligence is no longer a futuristic concept. It's already changing many aspects of medicine, from drug development to aiding radiologists to fighting opioid abuse.

To be clear, humanoid robots aren’t coming for doctors’ jobs, but “advanced data algorithms” are working to offer real doctors a helping hand. Healthcare workers could use that now more than ever: The United States faces a growing physician shortage, which could contribute to further clinician burnout and limit patient access to care.

Healthcare institutions across the world are adopting new machine learning and AI tools to ease provider burden and improve patient outcomes—though some are learning that with new tech comes new challenges.

Here are five ways that AI is already being used in healthcare.

Advanced AI tools may someday be ubiquitous at each patient’s bedside. But already, they’re helping doctors get to bedsides sooner.

Many hospitals now implement smart digital command centers that optimize staff and resource allocation. In the Johns Hopkins Medicine system, the command center uses AI to scrape through reams of data, including EHR data, to forecast patient volume as soon as the next shift or for weeks beyond. That has been crucial for deploying resources to meet emerging needs, especially during the ongoing COVID-19 pandemic.

Since the AI-powered command system came online 5 years ago, the system has delivered impressive results. Patients in the emergency department are now assigned to beds 38% faster—a time savings of about 3.5 hours. On average, the Johns Hopkins team can now pick up transfer patients 43 minutes sooner. And post-surgery transfer delays have been reduced by 83%.

“Without the command center, there would surely be more barriers to transport,” Leonard Barton, the Medical Director at Johns Hopkins’ Suburban Hospital location, said. “We’ve truly become a coordinated system like never before.”

The American College of Radiology’s Data Science Institute lists dozens of use cases for AI in the field. It’s a natural fit for how machines learn: by gobbling up and indexing huge troves of previous scans, the algorithms can quickly learn patterns and seek out abnormalities. It’s already helping radiologists detect everything from early cancers to previously difficult-to-detect fractures.

Early in the COVID-19 pandemic, for example, rapid tests weren’t available and physicians were still learning to diagnose and treat patients who presented in the emergency department. Mount Sinai Health rapidly developed and deployed an algorithm for CT scan analysis that worked in combination with other key health metrics to detect the novel disease with a higher degree of sensitivity than human radiologists.

As the pandemic evolved and tests became less scarce, Mount Sinai’s AI capabilities continued to provide value by discerning which patients were in recovery or in need of ventilation.

Genomics is an intriguing new frontier for medicine. It promises to deepen humankind’s understanding of individual biology and unlock highly personalized treatments. By understanding biological nuances in individual patients, researchers believe they can craft unique care plans that will produce better outcomes.

But since no human being can interpret the billions of data points involved in molecular genomics, personalized medicine hinges on AI—and it’s already showing its value for cancer patients.

At Moores Cancer Center at UC San Diego, oncologists are using AI-based genomics technology to tailor treatment for hundreds of their cancer patients. It performs extensive analysis on a patient and their cancer cells and matches them to different drugs, pointing clinical care teams in the direction of treatment options that may have the highest chance of success.

Early results are encouraging. Working with a group of 265/429 therapy-evaluable patients, researchers demonstrated that 55 percent of patients who had the highest degree of treatment-matching and who received that treatment reached the 3-year survival mark, compared with 25 percent of patients who received more conventional therapy. Results were published in a 2020 Nature Communications study.

“Patients who underwent a molecular tumor board-recommended therapy were better matched to genomic alterations in their cancer and had improved outcomes,” said Razelle Kurzrock, MD, director of the Center for Personalized Cancer Therapy at Moores Cancer Center.

“AI is going to lead to the full understanding of human biology and give us the means to fully address human disease,” one researcher in the field told Nature. “The way we develop drugs and assess them in clinical trials will all come down to very sophisticated pattern recognition.”

"An enormous figure looms over scientists searching for new drugs: the estimated US $2.6-billion price tag of developing a treatment. A lot of that effectively goes down the drain, because it includes money spent on the nine out of ten candidate therapies that fail somewhere between phase I trials and regulatory approval,” the authors wrote. "Machine learning and other technologies are expected to make the hunt for new pharmaceuticals quicker, cheaper, and more effective."

To that end, many major companies are partnering with AI firms in hopes of developing drugs faster and more inexpensively than before. Pfizer, for instance, began working with IBM Watson as far back as 2016 in its quest for immuno-oncology medications. Others like Sanofi, Roche subsidiary Genentech, and other major biopharma players have entered similar collaborations to use AI to search for drugs.

But while AI-discovered drugs are still very much in the development phase, AI is already speeding up drug development in other ways.

Clinical trial recruitment is a great playground for AI. Clinical research requires a narrow set of conditions and characteristics for potential participants, which typically makes life hard for trial recruiters. But algorithms work best with tight guidelines, and they can quickly identify numerous promising candidates from available health data, typically far faster than a human researcher.

AI methods even expedited clinical trials for the Johnson & Johnson COVID-19 vaccine, allowing researchers to identify potential hotspots before they sprung up so that they could conduct trials there.

The opioid epidemic has been a national disaster, and the onus is on doctors to be as informed and discerning as possible when prescribing the powerful painkillers. As such, prescribers are looking to AI to prevent overprescription.

A team at the University of Florida just received a $3.2 million grant from the National Institute on Drug Abuse to develop and study a new machine learning tool that will “help clinicians identify patients at high risk for opioid use disorder and overdose.”

The publicly funded study will be piloted in Florida, and is focused on better understanding the issue from a pain management perspective.

“Usually, patients need opioids because they are in pain. If our platform can better inform strategies around pain management and not increase the risk of a bad outcome, like overdose or addiction, then we have accomplished our goal,” noted the authors of an article published by the UF College of Pharmacy.

Some health systems and large pharmacy chains already employ an AI-based score for patient overdose risk. According to a Wired report, some of these tools may be preventing people from filling necessary prescriptions due to the horrible fact that they were sexually abused in the past, or even blocking previous overdose victims from medications that prevent overdoses.

Per the Wired report, AI doesn’t get it right all of the time. AI-driven healthcare poses some serious ethical and legal challenges. In a 2020 book titled, Artificial Intelligence in Healthcare, authors argued that for AI’s potential in healthcare to be fully realized, the following ethical issues need to be addressed: informed consent to use; safety and transparency; algorithmic fairness and biases; and data privacy.

Similarly, legal challenges of AI need to be tackled, including safety and effectiveness; liability; data protection and privacy; cybersecurity; and intellectual property law. “AI has tremendous potential for improving our healthcare system, but we can only unlock its potential by starting now to address the ethical and legal challenges facing us,” the authors wrote.

“We not only need to rethink current regulatory frameworks and update them to the new technological developments... but it is also important to have public and political discussions centered on the ethics of AI-driven healthcare such as its implications on the human workforce and the society as a whole,” they concluded.